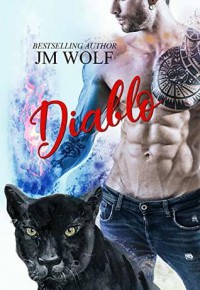 Trace Black hasn’t forgotten the tragic death of his parents and birth pack. His only focus since then was looking after his twin brother, Casey. Now that Casey has found his fated mate and started a family of his own, Trace has given everyone the cold shoulders, preferring the comfort of solitude. But one alpha who rescued him from being attacked by beta wolves changed everything for Trace, as he once again faces the monster who killed his family. Unfortunately, that same monster is also his fated mate.

A decision made in the heat of anger and vengeance changed Antonio de la Llama’s life, and not for the better. Now an alpha jaguar shifter and fire mage, Antonio spent the next four-hundred years unable to control the evil that burned within himself, thus granting him the name, Diablo. But one encounter with his fated Omega and Diablo has found more reason than ever to prove to Trace that he’s not the same monster who killed his family. That the strength which comes with love is greater than anger. But can Trace put his own anger for the alpha in the past?

An alpha who’s trapped in the flames of hell, and the omega who’s destined to set him free. Can these two troubled souls who’re still trapped by their past learn to let go, so they can face the future together? Will Trace be able to forgive the alpha who stole everything from him, and will Diablo find a new kind of strength worth holding onto?

TRIGGER WARNING:
This MPREG novel contains sexual and verbal adult content specifically made for adults 18 and up! This novel also contains a lot of action and violence, death, snarky ice wolves, sexy belly dancing, steamy fire play in the bedroom, and cute babies.